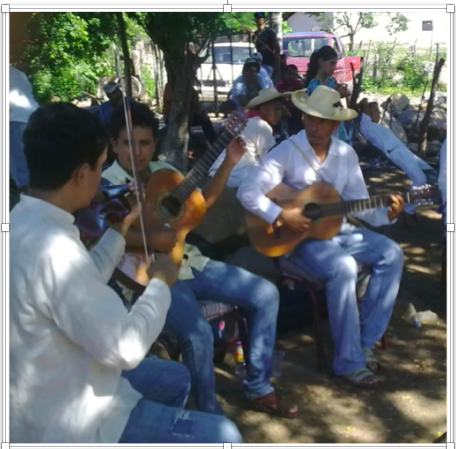 All three began playing various stringed instruments when they were young children, learning from their father and uncle, campesinos dedicated to farming who also played traditional music of the region. After meeting David Durán Naquid, a dance instructor who promoted traditional music and dance, the youngsters expanded their repertoire to include all the genres of the broader Tierra Caliente region. Durán took them to meet and learn from master violinists, many of them who lived hours from Turicato. These masters included virtuosos who have since passed away such as Rafael Ramírez Torres of Huetamo; don Juan Reynoso Portillo of Riva Palacio; don Custodio Villa Martínez of Carácuaro, and don Leandro Corona of La Huacana. They have also studied with don Serafín Ibarra of San Diego Curucupatzeo who lives in Morelia as well as José Jiménez of Zicuirán; guitarists don Cástulo Benitez de la Paz of Altamirano and don José Cruz of Huetamo; harpist don José García Abarca of Arteaga; and tamborita player don Faustino Gutiérrez of Huetamo.

Martin, Alaín and Huber have performed as members of Los Jilguerillos del Huerto and have shared their knowledge with youngsters at music camps organized by the nonprofit organization Música y Baile Tradicional, A.C. They have also taught at the Centro Cultural El Huerto in Morelia. All are adept at playing violin, harp, tamborita, tololoche, guitarra de golpe, guitar and vihuela.

In addition to learning from traditional musicians, they have studied at the Conservatorio de las Rosas in Morelia, Michocán.