From my first tentative steps into don Juan Reynoso’s home in 1998, a truly wonderful relationship developed. When I arrived for my first one-on-one lessons with Juan, I spoke no Spanish and he spoke no English. With our common language of music, however, and his infinite patience, I slowly began to record, transcribe and learn his vast repertoire. I would visit for a month or two at a time and study with Juan three hours a day, seven days a week. On most days I would then visit one of over a dozen other violinists, studying with them as well.

I made roughly 20 trips to Tierra Caliente del Balsas, where Guerrero and Michoacán meet until Juan’s death in 2006. By the end of my Mexican studies I had recorded roughly 3,000 hours of lessons, half on DAT audio tape and half on digital DV video tape. Over 800 pieces from the repertoires of these violinists have been transcribed. Juan Reynoso had a passion for harmonizing the pieces he played for three violins, so together we arranged over 200 pieces for violin trio. I have further arranged two dozen for string quartet and string orchestra. Other visiting string players from the U.S. greatly assisted with the project as well.

I recorded all of every lesson. Now I have over 1300 hours of DAT audio and another 1500 hours of digital video. Whenever possible, I made transcriptions of the tunes while the violinists played. In other cases there wasn’t time to transcribe the tunes as they were being played so I transcribed them later from the recordings. In the early years I hand wrote the transcriptions. More recent transcriptions have been made using the Finale computer music writing program. Soon all of the tunes will be in this format.

It was never my intention to collect these recordings and transcriptions to hoard them. Rather, my over-riding goal has always been to share this music with the world. The more people who have the chance to hear these remarkable pieces, the better. To that end, I’m constantly posting the best performances of the music to YouTube. Visit our three YouTube channels—Juan Reynoso, Juan Reynoso Live and Paul Anastasio, with around 350 tunes posted.

Copying and indexing the entire archive has become a daily habit. This re-visiting of the material allows me to do something I’ve wanted to offer “Private Lessons with Juan Reynoso and Friends.” These lessons will generally include a DVD of Juan or one of his fellow violinists playing a piece with a matching Finale transcription of the same piece. In some cases, where I’ve not yet located video footage of a tune, I will instead offer an audio CD of Juan playing the piece. If I have a recording of the session at which I learned the tune, I’ll include that. In other cases, I’ll offer a disc with multiple performances of the tune.

Here is the reason I pair recordings with transcriptions, and why I offer them as a set. While I endeavor to present the most accurate transcriptions possible, a great player such as Juan Reynoso plays with many subtleties. The best way to play the transcriptions is to first have the opportunity to hear how Juan intended the tunes to sound. 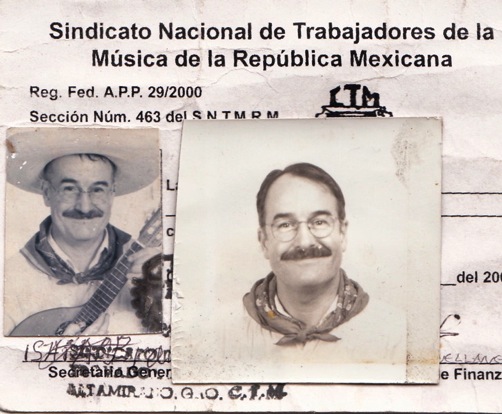 The most gratifying thing of all about this mammoth, life-changing project has been the sea change in Juan’s comments when asked about the future of his music. In the early 2000s he would always say, “I’m just playing an old music that’s gone out of style, and I wonder and worry about what will happen to it after I’m gone.” Toward the end of his life when asked the same question, he replied, “I have discípulos (students or disciples). They are learning my music and I now know that it will live on after I’m gone.” Now, a decade after his passing, I’m proud to say that this is in fact the case.

Violinist Evaristo Galarza who as of this writing (January, 2018) is still living.